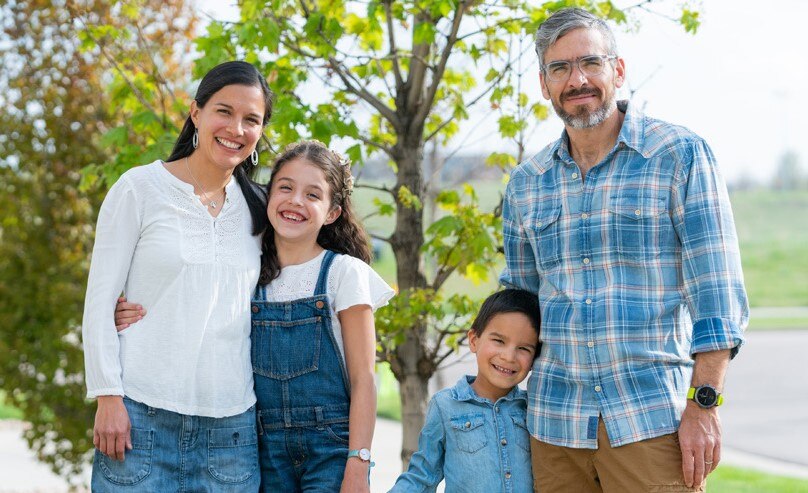 Nine-year-old Emilia is an extremely talented young girl living in Colorado. She has many interests but is especially passionate about theater. “I am a theater person!” she exclaims. Her specialty is singing and dancing in musical theater productions. “One of my favorite songs is Welcome to Wonderland,” she shares, which is from the musical Alice in Wonderland. Most recently, she was cast in a production of The Jungle Book as the narrator and a singer. Emilia’s other interests include art, volleyball, basketball, swimming, skiing, and hockey. Clearly, she has not let a diagnosis of a serious liver disease called biliary atresia keep her down.

In addition to being busy with theater and other activities, in 2019, when she was only 7 years old, Emilia was selected to represent Children’s Hospital Colorado as an Ambassador—a great honor. In this role, she shared her story as someone living with biliary atresia, and participated in community fundraising events. For example, Emilia participated in a fashion show preceding a Colorado Avalanche hockey game and served as a host at the 2019 Children’s Hospital Colorado Gala. She was also asked to participate in an in-person interview with a Denver Bronco football player, and now as a result, Emilia says, “I have my medal as a junior reporter.” In describing all of her outreach activities, Emilia’s bright personality shines through.

Emilia also enjoys doing outdoor activities with her mother Lucia, father Marco, and younger brother Mateo. The family takes part in bike rides, walks, hikes, and swimming, whenever possible. Although they strive to maintain an active lifestyle, Lucia and Marco are well aware that Emilia has a serious liver disease and have to carefully plan the family’s activities accordingly. “She’s been pretty healthy and it’s just [a job for] us as parents to be aware and more cautious in everything she does. It’s hard for us, [and hard] for her to understand,” says Lucia. “But still, she’s a very happy girl.”

“She’s been pretty healthy and it’s just [a job for] us as parents to be aware and more cautious in everything she does,” says Emilia’s mother, Lucia, explaining how the family avoids activities that may increase her risk of an unwanted bleeding event due to her biliary atresia.

During her 6-week-old checkup, the pediatrician noted that Emilia looked jaundiced, and lab test results indicated that she had elevated levels of bilirubin. The pediatrician subsequently made an appointment for Marco and Lucia to bring their baby daughter to see Dr. Ronald Sokol, a pediatric gastroenterologist at Children’s Hospital Colorado. During this initial visit with Dr. Sokol, a liver biopsy was conducted that confirmed that Emilia had biliary atresia. Three days later at approximately 55 days of age, Emilia underwent the Kasai procedure. It was “a big surgery … we were extremely nervous,” recalls Marco. Thankfully, “it went pretty smoothly,” says Lucia. After a week in the hospital, Emilia was discharged and sent home. Lucia remembers those early days after the surgery: “We took care of her at home and she was ... pretty happy.” The only complication of the surgery was risk of an unwanted bleeding event. Additionally, the build-up of fluids in her abdomen, but after a few months, the excess fluids resolved.

“One of the hopes that we have is that soon, hopefully, there is a medicine that can reverse or stop the cirrhosis of the liver,” says Marco, describing how studies such as those conducted by the Childhood Liver Disease Research Network (ChiLDReN) may be able to help his daughter Emilia.

From the time she was discharged from the hospital following the surgery, Emilia has taken a broad-spectrum antibiotic every day to prevent an infection called cholangitis. Cholangitis arises when bacteria normally residing in the intestine enter the liver and cause infection. Despite the daily use of the antibiotic, she has had two episodes of cholangitis, which required high-dose antibiotic treatment in the hospital to combat the infections.

To maintain her liver function and overall health, Emilia and her parents take several proactive measures. Her liver function is monitored twice a year during her visits with Dr. Sokol. Marco recalls, “We kept her in good hands, and we followed the instructions from Dr. Sokol—and she’s been thriving health-wise.” Lab results indicate that her liver function has been fairly stable over time. In addition to liver function tests, her platelet levels are also measured. Because of her portal hypertension, Emilia has an enlarged spleen that “soaks up” more platelets from the blood than normal, making those blood cells unavailable to help stop episodes of bleeding. As a result, Marco and Lucia also keep a close eye on their daughter for any wound that isn’t healing as it should. Emilia refrains from activities that would increase her because children with biliary atresia often have nutritional deficiencies, she takes vitamin supplements daily along with a compound called ursodiol that aids in fat absorption. She also takes probiotic supplements. And, looking to the future, Emilia and her family participate in research.

When asked how likely he would be to recommend clinical research participation to others whose children have liver disease, Emilia’s father, Marco, says: “Yes, participate. It’s basically how improvement and progress in medical studies goes on…. It’s progress toward the future.”

Given the diagnosis of a serious liver disease, it was an easy decision for Lucia and Marco to enroll Emilia as a baby in A Prospective Database of Infants with Cholestasis (PROBE) clinical research study conducted by the NIDDK-supported Childhood Liver Disease Research Network (ChiLDReN). Logistically, her participation in the clinical study is easy and convenient. Dr. Sokol serves as both Emilia’s liver specialist and as the principal investigator for the PROBE site at Children’s Hospital Colorado. Blood is drawn during her twice-a-year visits with Dr. Sokol, and a small portion is used by researchers in the PROBE clinical research study to understand how the disease progresses over time. Emilia has also been participating in ChiLDReN’s FibroScan™ in Pediatric Cholestatic Liver Disease (FORCE) clinical study for approximately 4 years, which seeks to determine whether noninvasive monitoring of liver fibrosis is as reliable and informative a tool in children as it is in adults. This portion of the visit is performed quickly and utilizes an ultrasound device to measure scarring in the liver.

The family is happy to make these contributions to research that may not only one day improve Emilia’s health, but also the health of other children living with biliary atresia or other serious liver diseases. “One of the hopes that we have is that soon, hopefully, there is a medicine that can reverse or stop the cirrhosis of the liver,” says Marco. Additionally, Marco would encourage others to volunteer for research studies if the opportunity arises. “Yes, participate,” he says. “It’s basically how improvement and progress in medical studies goes on…. It’s progress toward the future.” As for Emilia’s future, she can’t wait for the next opportunity to participate in a musical theater production where she will no doubt steal the show with her vibrant energy, passion, and talent.